The Rattlesnake Hills Wine Trail is wine country like it used to be with wineries in the vineyards and owners tending the tasting bars. The Rattlesnake Hills is often referred to as the 'green' tour of the Yakima Valley wineries. Situated in the low rolling hills, the Rattlesnake Hills Wine Trail takes you through some of the best orchard and vineyard land in the area. Each winery offers a unique setting in which to enjoy the fruit of the vine. The tasting rooms vary from Northwest modern architecture to traditional European with everything in between. All tasting rooms are open to the public without reservations during their published hours. 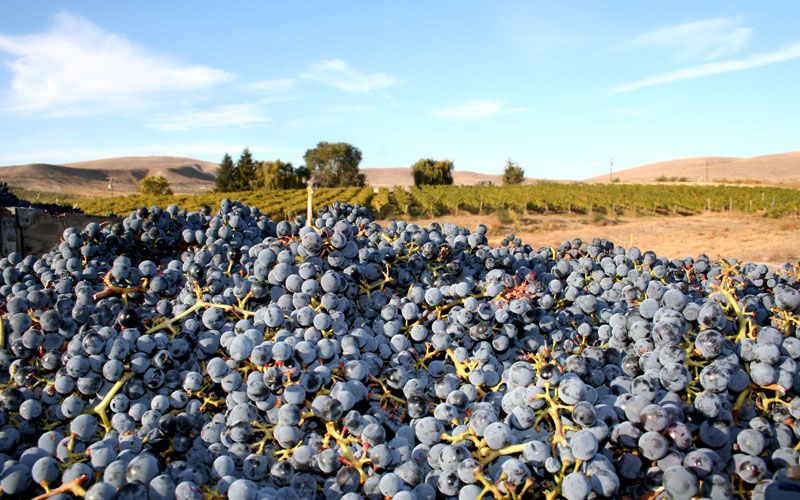 Our mission is to promote the wines produced in the Rattlesnake Hills AVA and to promote wine tourism within our area through high quality wines, education, and positive tasting room experiences.

Did you know the Rattlesnake Hills AVA (American Viticultural Area) is the ninth federally recognized AVA in the country? It is entirely contained within the Yakima Valley AVA, which is in turn is entirely contained within the larger Columbia Valley AVA. The hills form the northern boundary of Yakima Valley, and the AVA includes land between the north bank of the Sunnyside Canal and the entirety of the southern slopes of the Rattlesnake Hills between Outlook and the Wapato Dam. The AVA is centered around the city of Zillah. With elevations ranging from 850 feet to 3,085 feet, this AVA contains the highest point in the Yakima Valley AVA.

Vineyards in the Rattlesnake Hills AVA include the Morrison Vineyard, planted in 1968 to Riesling and Cabernet Sauvignon for Chateau Ste. Michelle. It is the oldest vineyard in the AVA. In the late 1970's and early 1980's, the Hyatt Vineyard, Whisky Canyon, Outlook, and the Portteus Vineyard were also planted. Many of the wines from other regions across the state are made with grapes that come from the Rattlesnake Hills AVA in the Yakima Valley.

Chasing Out The Snakes

Every March in celebration of the anniversary of the Rattlesnake Hills AVA (American Viticultural Area), St. Gail of Bonair Winery will read the official proclamation and then perform the ritual of Chasing the Snakes out of the Rattlesnake Hills. This will ensure our visitors and friends that no snakes will ever interfere in the enjoyment of all of our fine wines.

What does AVA stand for?

American Viticulture Area, a wine grape-growing region distinguished by geographical features. It is also known as an appellation.

Rattlesnake Hills was established an AVA in 2006

Who says whether an area is an AVA?

The Alcohol and Tobacco Tax and Trade Bureau (TTB), a federal department, regulates the AVA process, and decides when an application has merit.

How do you become an AVA?

In order to become an AVA, there is a petition process that defines boundaries, land formation, soils, climates, historic and current support for the name, and supporting evidence. There is a period for comments by the public, then the TTB reviews all information and documents, and rules whether the area can be called an American Viticulture Area.

Why is Rattlesnake Hills an AVA?

Several factors distinguish the Rattlesnake Hills area from others close by. These include temperature, soils, and climate.

What are the boundaries?

From Union Gap just south of Yakima, the boundary follows the Sunnyside Canal (at about 900 feet elevation) to the power line just east of Tefft Cellars. It follows the power line to the summit of Rattlesnake Hills, than back along the ridge to the point of origin.

Why was it named the Rattlesnake Hills AVA?

An AVA must be given the most common name both currently and historically. The Rattlesnake Hills name originated in the 1850s with the first settlers in the area. It has appeared on Yakima Valley maps since 1910, and was the only choice since the AVA lies on the Rattlesnake Hills slopes.

What does it mean to be an AVA?

An AVA defines where the wine grapes come from. Grapes will take on certain flavors, based on the soil, climate and temperature from the region they were grown in. Consumers and vintners can then determine the “flavors” of the grapes in a certain wine based on the AVA where the grapes were sourced. When a vintner prepares a wine, if 85% of the grapes in that mix are from the Rattlesnake Hills, the label can say “Rattlesnake Hills” on it.